Why is SkillSelect More Competitive in 2017-18? Getting a SkillSelect invitation is much more difficult this year compared to previous years. This is case for most occupations across the board, not just popular pro rata occupations such as accounting, IT and engineering. This article looks at SkillSelect trends for this year, reasons why it has become more difficult and ways to improve your chances.

The Skilled Independent Subclass 189 visa is a permanent visa which you can qualify for based on your own qualifications, work experience and English language ability. It does not require sponsorship or nomination by a relative, employer or state/territory government and so is an attractive option for many applicants. You cannot apply directly for a Skilled Independent visa - you must first lodge an Expression of Interest (EOI) through SkillSelect and receive an invitation to apply. Invitation rounds are conducted every 2 weeks and the "best" applicants based on their score on the General Skilled Migration points test receive an invitation each round. For the 189 visa, you must nominate an occupation on the Independent and Family Sponsored Occupations List (IFSOL). Occupation ceilings are set at the beginning of the program year, which specify a maximum number of EOI invitations for each occupation on the IFSOL. The program year goes from 1 July to 30 June the next year. Some occupations are very popular and receive far more eligible EOIs than the occupational ceiling. These occupations are called "pro rata" occupations - a maximum number of invitations is set each round and so the required points may be higher or waiting time longer for these occupations. Most other "non-pro rata" occupations don't get anywhere near the occupation ceiling each year, and hence have a lower required points score for an invitation.

For all previous years that SkillSelect has been in operation, 60 points has been sufficient to receive an invitation for a 189 visa, unless your occupation was on the pro rata list. This year, the required score has been at least 65 and for some rounds it has been 70 points for non-pro rata occupations. The chart below looks at the changes in the number of invitations issued in 2017-18 versus 2016-17 and can be used to explain why the required points score is increasing: 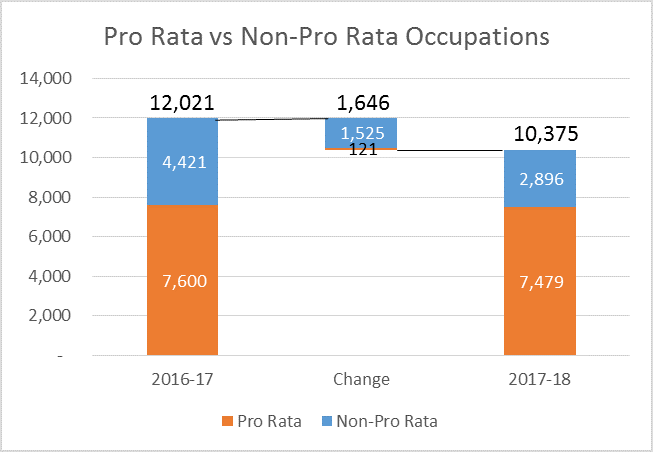 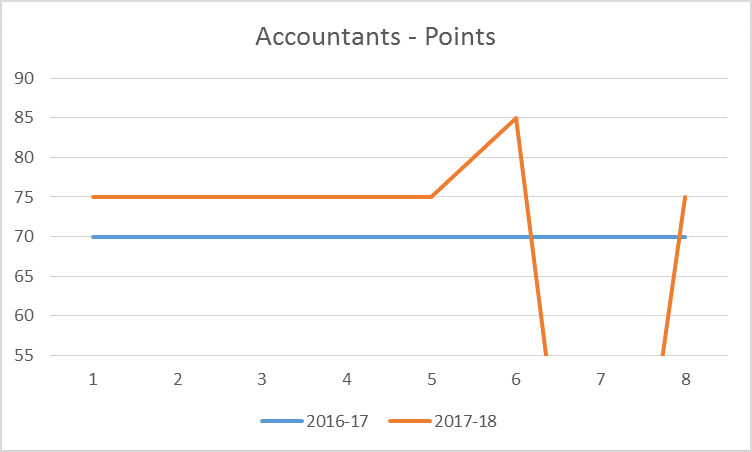 Contrary to expectations, applicants have required at least 75 points to receive a 189 invitation in 2017-18 versus 70 points last year. In the 20 September 2017 round, applicants required 85 points for an invitation as an accountant. What's happening here?

One clue is to look at the distribution of invitations by points score as compared to last program year: Points from Other Sources

Even with superior English, most applicants would obtain only 70 points. So many applicants are claiming extra points from other sources - this might include: Even so, the increase in people claiming 75 points over the course of 2017 is staggering. This suggests other factors are at play.

One possibility is that people are over-claiming points when they lodge their EOI. This may result in an invitation being issued, but to be granted a visa, you would need to be able to prove each of the points you have claimed. Failure to do so will result in refusal of the visa application, but there's nothing stopping applicants from "spamming" SkillSelect with EOIs which claim high points. EOI applicants over-claiming points appears to have been the cause of the high minimum score required for accountants in the 20 September 2017 round. Immigration has conducted a number of "manual" rounds for accountants to ensure this does not recur, but there is the possibility that over-claiming is still happening in other occupations.

Lodging More than One EOI

Another possibility is that a single applicant may be lodging more than one EOI. There is no cost in lodging an EOI, and applicants can lodge as many EOIs as they wish. If the applicant has high points, they may be invited more than once. This will "use up" a number of places in the occupation ceiling which will then no longer be available to others.

Because SkillSelect is more competitive this year, we would recommend that applicants aim for as high a points score as possible. This would include:

The 2017-18 program year is by far the most competitive one yet for SkillSelect. These days, obtaining a SkillSelect invitation is the most challenging part of the General Skilled Migration application process. Using a migration agent may give you that extra edge you need to get your PR. If you would like advice on how to improve your chances of qualifying for General Skilled Migration, please book a consultation with one or our advisors.